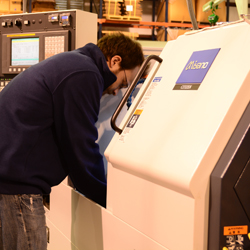 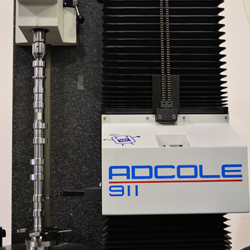 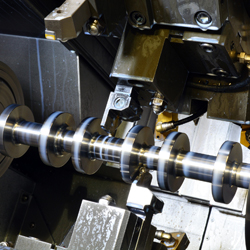 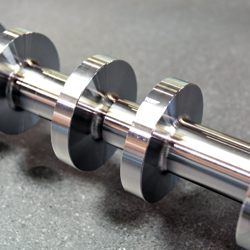 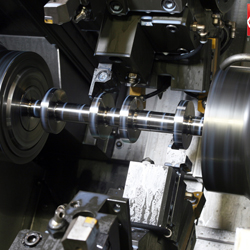 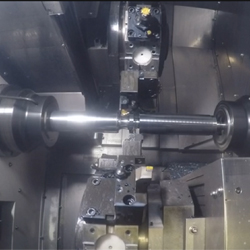 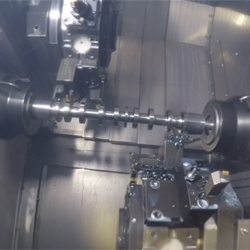 When long lead times for outsourced parts led to dissatisfied customers, Greg Caloudas took manufacturing destiny into his own hands.

“Our customers were not happy with lead times, and we wanted to eliminate relying on anyone for any specific operation for cam shafts,” he says. “I also wanted to produce a product that was designed for the levels of performance my customers were achieving in their engine setups rather than using a similar OEM-cast camshaft core.”

Caloudas has been in business since 2005, when he began making precision parts for European and Japanese sport-compact cars. He has since created his own brand of products — GSC Power Division — that are sold to precision performance automotive shops.

“There is nobody in our marketplace doing what we do presently regarding our camshaft production,” Caloudas says.

Caloudas took all elements of production into his own hands in late 2013, when he acquired a new Hyundai Wia LM1800 TTSY twin-turret lathe with live tooling from Adept Machine Tool, and an Okuma vertical mill with a 4-axis rotary.

“The software has really helped us make the process quicker, along with stepping up the tooling package that we run. I’ve never run into something that the software can’t do, or that I can’t create a toolpath from.”

When a computer-aided-manufacturing (CAM) solution initially chosen by Caloudas underperformed on the shop floor, he began an in-depth search for software that would meet his very specific demands.

“We went through all the solutions with a fine-toothed comb to find out what we really wanted and needed from a CAM solution,” he says. “When I was shopping for a machine, other machine-tool manufactures were telling us we could get 6-10 parts out in a shift — and we needed to be able to do 50.”

Caloudas ultimately chose the EDGECAM CAM solution, by Vero Software, specifically for its advanced milling and turning capabilities.  With EDGECAM, he had found the right combination of machinery and software needed to hit his target.

Along with a highly specialized grinder used to shape camshaft lobes, Caloudas now had all the tools necessary to generate greater customer and personal satisfaction.

“We really surprize a lot of people when they see what we are doing in a short amount of time,” he says. “We had so many people telling us that we had to do it a different way, or that it wouldn’t work.”

The production method that Caloudas created involved streamlining operations and maximizing the capabilities of his machinery.

“In the turning center, we needed to remove a lot of material,” he explains. “We’re taking 35 pounds of steel bar down to 10 pounds.”

To accomplish this task in as little time as possible, Power Division utilizes EDGECAM’s Waveform roughing strategy, a high-speed machining technique that maintains a constant tool-cutting load by ensuring that tool engagement into the material remains consistent throughout the operation.

Because the toolpath moves smoothly, sharp changes in direction are avoided and the velocity of the machine tool also remains consistent. As Waveform maintains constant engagement with the material, the feed rate can remain at the optimal value throughout the cycle, which improves tool life and reduces the risk of tool breakage.

“One of the main things I was after was the EDGECAM Waveform cycle,” Caloudas says.

To machine his camshafts, Caloudas uses a full-radius groove tool and takes advantage of the software’s ability to allow the programmer to determine the amount of tool contact.

He also syncs the bar of material so that it is connected to the lathe’s main spindle and sub-spindle. He uses Waveform on the top and bottom turrets for two tools and processes the camshaft by machining different sections of the cam.

“It cuts the entire cutting time in half,” says Caloudas of the Waveform turning cycle. “When we first started, we were putting a bar out without Waveform, and it was about 21 minutes in a cycle. We were using balance turning with the upper and lower turrets.”

Today, Caloudas can turn the same operation around in about nine minutes.

“The software has really helped us make the process quicker, along with stepping up the tooling package that we run,” he says. “I’ve never run into something that the software can’t do, or that I can’t create a toolpath from.”

Caloudas also takes advantage of EDGECAM’s knowledge-based strategy manager, which enables programmers to easily create processes that can be used repeatedly to save time on repetitive tasks while maintaining and saving best practices.

“One of the things we’ve been able to do is utilize strategies we created,” he says. “We’ve been able to write saved processes that we can use again. You just answer five questions and it puts all the toolpath together.”

At the heart of the EDGECAM Strategy Manager is a simple and use-friendly graphical flow chart that helps programmers create flexible strategies for machining solid models. Without imposing rules or working methods, the strategy manager empowers programmers to fully and consistently utilize their own knowledge.

Caloudas has created a strategy in EDGECAM for his precision drill and ream process, which entails drilling a hole and boring to true it, followed by drilling 15 to 20 times the diameter of the hole and, finally, reaming the hole.

When the camshafts ultimately make their way to the grinder, a chamfer has to be cut on each end to center the part. This is typically performed as a separate operation, but is completed by Caloudas with the single turning operation.

“We process the bar on one end then with the bar synced between two spindles, and then we do the back side of the bar, all in one program,” Caloudas says.

“It’s a four-part process that, if I had to go through it every time, would not be very efficient,” he explains. “It involves different sized drills and the selection of appropriate tooling, which takes time.”

Caloudas and his EDGECAM reseller, Steve Harrison of Silverhawk Solutions, created a strategy for the process, which drastically cuts programming time.

Caloudas also utilizes EDGECAM’s advanced milling capabilities to prepare his cam shafts for the grinder, where they will take on their final shape.

“What we’re doing is using the advanced milling suite in EDGECAM, and its advanced 5-axis milling cycles,” he says.

EDGECAM offers an extensive suits of advanced milling cycles that are geared toward rapid toolpath generation and control, as well as reduced cycle times and greater overall efficiency.

GSC Power Division’s camshafts feature lobes that will ultimately be shaped with the company’s precision Shigiya CNC lobe grinder, but material must first be removed on and around the future lobes with the mill.

The addition of EDGECAM and the use of its advanced milling cycles resulted in material removal that takes about 50 seconds per lobe. Caloudas is now sending parts to the grinder with less material to be removed.

When GSC Power Division used castings to make the cam shafts, four to five millimeters of material had to be removed. With the addition of EDGECAM, the amount of material has been reduced to one to two millimeters.

“The biggest thing is that we removing stock from the blanks we purchased took almost four minutes per part,” says Caloudas, who adds that it now takes two and a half minutes to mill and grind the lobes.

“It now takes less time, and we have better product quality,” he adds.

Today, Caloudas is turning out not only more parts more quickly than ever before, but parts of higher quality.

He’s pleased with the support he receives from Harrison, of whom he says, “He always looks out for the best interests of the customer. He’s a breath of fresh air, to be honest.”

Caloudas is also no longer subject to timetables imposed by foundries, and his customers are happier than ever before.

“We are now making camshaft blanks that are designed to withstand four to five times the output of the stock engine,” he says. “My customers push every aspect of a car’s performance, and they need parts that can take the abuse.

Business: Production of camshafts and valve-train components for performance vehicles.

“The software has really helped us make the process quicker, along with stepping up the tooling package that we run. I’ve never run into something that the software can’t do, or that I can’t create a toolpath from.”