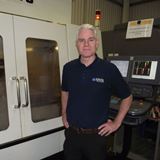 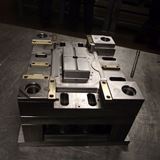 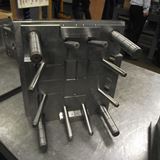 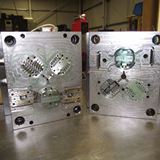 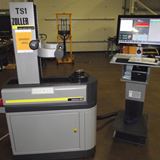 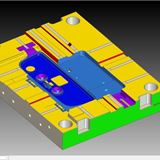 Mold maker Kavia Tooling have developed their own machining strategies to run multiple CNC programs at once by merging several of them into a single file… many containing around 1.5-million lines of code.

Working out of 9000 square foot premises in Burnley, with 15 employees, the company produces around 80 mold tools a year for plastic injection molders, ranging in size from small tools of 156 mm x 156 mm, anywhere up to 2-tonnes.

"EDGECAM is absolutely integral to our entire manufacturing process. It’s at the heart if everything, and is vital in terms of what it does through the customization, standardization and removing errors."

The company has invested heavily in customizing a range of software and equipment, including CAM solutions from EDGECAM, and a Pioneer Co-ordinate Measuring Machine from Hexagon.

EDGECAM drives seven high-speed CNC mills with spindle speeds varying from 12,000 to 30,000 rpm, and Sodick EDM machining, but Production Director Mark Cole says it’s no ordinary machining process. “EDGECAM have customised the software to create a system for us which we call Merge. It means we can put several components on the machines at once, and the EDGECAM CNC code for them all is merged into one large program, along with the datums to set the parts on.”

He cites a recent example when they were working on two cavity plates on one side of the machine, and four inserts on the other. “We put the individual EDGECAM CNC programs for each component together into one file, and it all went to the machine as one large program.”

It also keeps the cutting tools to a minimum, by looking at information such as duplication, length and quality of the tools in all the programs. “For example, if there were two repeating cuttings tools in the individually merged programs, it selects the best one for the manufacturing process. It goes through every single NC program and rearranges all the tools accordingly.

He says the benefits are “unbelievable,” creating a completely standardised system. “The customised software works for us exactly how we want it to, and everyone from the CAM programmer to an apprentice setting the tools, works in the same way. It demystifies shop floor activities and eliminates error.”

Their most recent investment in customization is the unusual way of using a Hexagon Pioneer Co-Ordinate Measuring Machine (CMM). Rather than checking finished dimensions and ensuring a part is manufactured within tolerances at the end of the manufacturing process, Hexagon wrote a piece of customised software to enable them to use it to find offsets at the beginning of the operation.

Known as Zero Transfer Fixture Plates, this particular customization means that instead of having to put each part on the machine and set it, the component is set on the CMM which gives them the X, Y, Z and U orientation. This can be done with any number of components, and the information is transferred to the machine through the EDGECAM Merge software. This uses the data to add a programmed work offset and co-ordinate rotation into the appropriate merged programs. “We only have to put the Zero Transfer Plate, which is micron-accurate, into position on the machine, and it knows exactly where the part is, so we don’t have to set it.”

The end result is a CNC program which can machine several parts at a time, without the need to use the machine as a set-up station, as all preparatory operations are now carried out offline.

Mark Cole says: “Without the CMM, if we were setting up a component square on the CNC machine for example, we’d have to ensure it’s perfectly in line with the machine’s axis. If we were doing that for ten components the process would be prone to error, especially where there are overhangs. But setting them on the CMM means everything’s done automatically, because it tells the machine the angle of the part.

“The customised software works for us exactly how we want it to, and everyone from the CAM programmer to an apprentice setting the tools, works in the same way. It demystifies shop floor activities and eliminates error.”