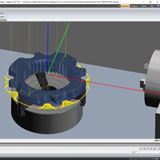 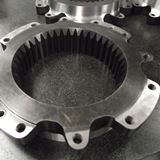 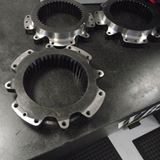 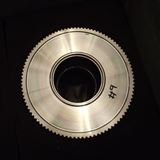 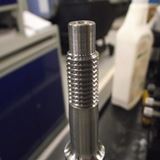 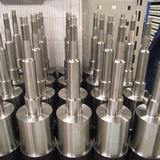 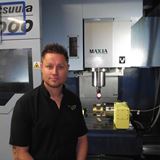 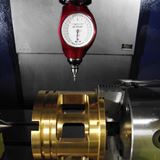 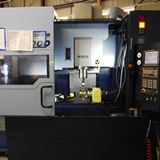 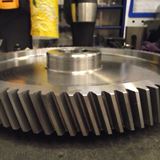 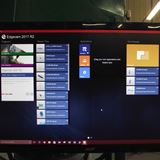 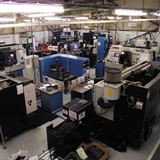 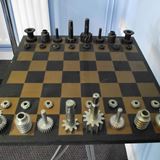 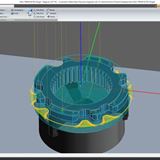 Gibbs Gears, based at Stoke Mandeville in Buckinghamshire, predominantly work on low to medium volume runs of loose gears, gearboxes and assemblies, along with specialized transmissions, and drive trains.

"We manufacture from a variety of metals including aviation grade stainless steels, carbon steels, case hardened and toughend tool steels, along with exotics such as Inconel and titanium, so EDGECAM’s ability to let us ramp up feeds and speeds is proving to be invaluable."

Managing Director Reece Garrod says they typically manufacture orders of up to 200 gears, for aerospace, motorsport, medical, subsea and commercial products. “Aerospace applications are largely for actuation, as part of the drive train mechanism to control flaps on wings. We produce cam and timing gears for motorsport, along with sequential gearbox and straight-cut crash gearbox assemblies for off-highway vehicles such as JCB and Caterpillar.” They also produce batches of up to 5,000 fine pitch module gears between 0.3 and 1.25 module.

They tried the game-changing Waveform Roughing Strategy, cutting H13 tool steel which had a Rockwell of between 53 and 58, on a production run of 30 gears where each individual standard milling operation on every part would have taken around two hours.

Technical Manager Dominic Prinsloo explains that Waveform slashed those two hours down to just 29 minutes. He opted for a standard carbide cutter with an eight per cent stepover, RPM of 6,800 and a feed rate of 2.8 metres a minute. “It meant that overall we saved an astonishing 45 hours of run time.”

And he says the entire batch was completed using just one Ø16 mm roughing endmill, which led to considerable savings on cutting tool costs as well. He feels they could have pushed the CNC 4-axis Matsuura VX1000 machine tool even harder, but chose to optimize it there, as it could run without supervision. “The operator was free to run a second machine, so again, that improved our overall efficiency.”

The company first became interested in EDGECAM at the 2015 Southern Manufacturing Exhibition. At that time their programming was all done at the machine, punching in G- and M- code. EDGECAM now forms part of a three-pronged programming system…they still input a small number of simple programs at the machine, and also program offline in ISO code, but EDGECAM is used on around 60 per cent of their parts, driving a number of Doosan and Mazak lathes and 4-axis Matsuura and Haas milling machines.

As well as dramatically reducing programming, set up and machining times the software also comes into its own on controlling feeds and speeds. “We manufacture from a variety of metals including aviation grade stainless steels, carbon steels, case hardened and toughend tool steels, along with exotics such as Inconel and titanium, so EDGECAM’s ability to let us ramp up feeds and speeds is proving to be invaluable.”

And Reece Garrod says other shop floor operatives are keen to work with EDGECAM. “We’ve recently started to use EDGECAM on our Agie Charmilles EDM machine for wire erosion. That was at the request of the shop floor. They saw the benefits EDGECAM brings to other parts of the operation, and wanted to try it where we need a quick turnaround. Wire erosion accounts for around ten per cent of our business. We use it mainly on tooling, rapid tooling, jigs, fixtures and gauging, along with gear forms – especially for motorsport. But it’s growing in terms of gear technology, and where it’s allowable in the process we’ll erode gears, keyways and splines.”

Describing how Gibbs Gears use the software, Dominic Prinsloo says once he receives the customer’s STEP file – normally to finished size – he imports it into Part Modeler, EDGECAM’s  3D modeling tool specifically designed for quick and simple construction or modification of solid models, and simulates a profile. “Then we’ll edit it to our tolerances for grinding, and revolve the profile again to make a finishing product which we can use for turning. We’ll load the stock model at this stage, and look at feature recognitions.”

EDGECAM is also used right at the start of an initial inquiry. “It’s now an important part of our quoting process. When customers provide us with a STEP file of the gears they want us to make, EDGECAM give us an accurate cycle time.”

They are also working towards bringing in the PCI template on the planning board, which he says will be particularly useful on two counts: firstly, to store common toolpath events in a ‘toolpath process library,’ for re-use on other parts. And secondly, to copy specific machining instructions from one part, and paste them into another. “This will accurately generate the feeds and speeds for whatever material we’re using.”

In conclusion, Reece Garrod says: “We originally looked at EDGECAM to help us progress with our ‘lean’ journey. KPIs showed that our biggest inefficiencies were coming in programming time, both for milling and turning, along with set-up and cycle times, and offline programming looked like the best way to overcome that. The fruit that’s been borne from investing in EDGECAM is that those time losses have been eradicated.”

“It’s now an important part of our quoting process. When customers provide us with a STEP file of the gears they want us to make, EDGECAM give us an accurate cycle time”.