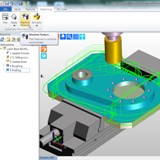 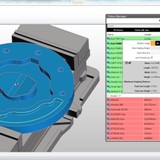 EDGECAM’s game-changing Workflow tools just got even faster. Workflow is already renowned for enabling CAD CAM engineers to apply toolpaths within seconds, and now, based on customer feedback, many enhancements have been made in the latest release, EDGECAM 2014 R1, mainly in the two areas of part setup and stock and fixture management, giving additional control and saving even more time.
Workflow was specifically designed for manufacturers to reduce costs, improve quality and hit shorter lead times by giving direct access to EDGECAM’s accelerated toolpath technology.
A Machine Feature command allows users to interactively select a feature on their component, which will then be machined. The user can elect to only rough, finish, or rough and finish, meaning they have full control over their manufacturing order, without the need to apply full automation.
And Fixture Manager sees the introduction of chucks and collets that can be used for milling and turning. An additional time-saver: the fixture manager will also automatically filter valid and invalid fixtures based on component size, and offer a dynamic placement preview before it is placed on to the component.
There are a number of manufacturing enhancements within the new EDGECAM 2014 R1, including New Chamfering Cycle, which is a modern command supporting 2D and 3D geometry. The option to automatically debur sharp edges also removes the requirement to prepare geometry, which is another time-saver. It fully supports cutter radius compensation as well as 3D chamfering.
Support for 3D Normal Offset Output:  Surface machining cycles now have an added control to compensate for tool wear on 3D machining toolpaths. This gives greater accuracy and control on tight tolerance components.
Further enhancements to EDGECAM’s ease of use include a new design CPL datum marker with color coded rotation bars and axis labelling. And following on from the introduction of pictures on dialogs in 2013 R2, this has been extended to the ‘rough and finish turn cycles’ promoting ease of use for new or infrequent users.
Also, EDGECAM 2014 R1 introduces an interactive editing tool for re-designing standard dialog boxes. The ability to “Mask” the standard interface allows users to pick which modifiers settings are displayed, empowering them to create command dialogs aligned to their preferred manufacturing methods.
Parts of EDGECAM have gone mobile in 2014 R1. The new Live Job Reports is designed to be simple, easy and quick for small customers, while being very powerful for advanced users who want to customize it. It keeps the same performance on both small and large databases, easily handling thousands of tools and toolkits. And as this function runs on a website, the client can be a PC, and even a tablet or phone, making it possible to access the reports from the shopfloor on the go, without the need to print.
A new item of functionality in Part Modeler finds fillet radii on third-party imported solid models and allows them to be edited. This Finding and Editing Fillets on Imported Models feature aids users preparing CAD data for manufacture.
Other Part Modeler enhancements include advanced loft and sweep commands which allow users to loft dissimilar shapes and add guide curves.