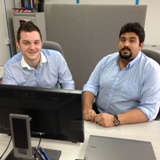 EDGECAM has expanded its team with the appointment of two engineers – one to develop post processors, and the other joining the customer support desk.

“Post processors are often referred to as a CAM system’s ‘Achilles Heel’,” says EDGECAM’s latest Project Engineer, Christos Andreou. “Some manufacturers understand their importance, and start thinking about them as soon as they order a new machine tool. While others, unfortunately, never place any importance on a post processor until they find they’re losing production time editing programs on the machine, or have to contact Technical Support for help.”

Having joined the EDGECAM team from a company where he was responsible for the manufacturing of complicated 3D components and proving out the NC programs for multi axis machining centers, he studied at Brunel University where he gained his MSc in Engineering Management. Joining EDGECAM he completed a thorough product training schedule before joining the support team answering customers’ technical support questions, which has given him a strong platform to move onto developing custom post processors using his knowledge to show customers how important they are.

“Generating NC programs is the most important part of the whole CAM process. Not only does the NC program need to be error-free, it must be generated in such a way that the users can understand what’s happening in the program, making it easier for editing, to avoid any lost production time.”

His experience includes customizing software for engineering based applications in various programming languages. And his engineering background, knowledge of manufacturing and programming skills provide a solid base for post processor development, working with customers.

EDGECAM’s latest Support Engineer, Ben Miller, has worked on both CAD and CAM aspects of manufacturing, starting his career as a design engineer. “As I developed my skills in CAD I found that CAM went hand in hand with the design process and that quickly took my interest.”

For the last five years he has worked as a programmer/setter on a variety of machines, and at the company he was with before joining EDGECAM he led a project to minimize cycle time and handling time on a specific project. “I cut the number of machines and operations from three to one, using a trunion style 4th-axis with two large electro magnets, fully controllable from the machine.”

As shift supervisor/programmer, he worked on components across a wide range of industries, including oil and gas, medical, automotive and Formula 1, which has already proved invaluable when helping EDGECAM users overcome specific issues via the Support Desk.