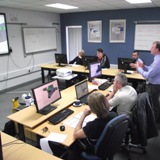 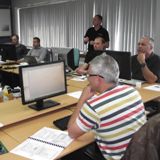 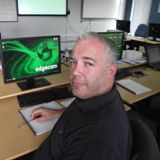 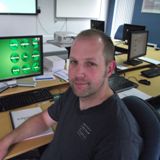 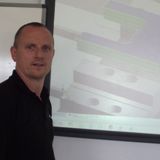 EDGECAM users agree that learning about the latest developments in each release of the software is vital in helping them keep ahead of their competitors.
New and enhanced functionality in EDGECAM 2014 R2 include faster and better ways of improving productivity and becoming more competitive in the market place.
But EDGECAM Training Team Leader Simon Blakey says manufacturers who don’t attend the upgrade training sessions held around the UK aren’t able to use it to its full capacity. “The seminars explain how the enhancements fit into the existing software and provide detailed information on how to use that functionality. “It’s important users come to the courses so we can show them how to make their work easier and their production quicker and more efficient.”
He says EDGECAM has changed considerably in four releases over just two years. “It’s a completely different piece of software, and each training session keeps everyone up to speed with it.”
Well over 100 manufacturers attended the series of courses, finding out how to utilize enhancements to EDGECAM’s automation tools, Part Modeler, Workflow, Strategy Manager, and many more aspects of the game-changing software.
Simon Trennery, production engineer at Sheffield-based X-Cel Superturn Ltd, says the upgrade training showed him how to improve customization: in particular how all areas of Workflow have been enhanced, including the ribbon bars being laid out in a logical process order, and improved machining strategies.
“What I’ve learned today will make us more organised in how we use the software. And as we machine with lathes and mills, I was interested in the new functionality to improve both those aspects.”
Before attending the course, Claro Precision programmer and production engineer Dominic Watson had not used EDGECAM’s Workflow interface, but says he is definitely switching to it, having seen how the icons and ribbons are fully customisable. “It’ll make such a difference for me. I can streamline it so I only see what I need to.”
Claro have used EDGECAM’s Waveform Roughing Strategy since it was introduced. “With some of our specific machining requiring the ability to define the entry point, new functionality in 2014 R2 allowing the user to select where the toolpath should start cutting is extremely valuable. I was really impressed to learn about that today, and I wouldn’t have known about it if I hadn’t come on the training course.”
Simon Blakey says EDGECAM is constantly developing new functionality to improve manufacturers’ processes, speed up programming and generate better quality toolpaths. “So those who regularly attend upgrade training see the new functionality and understand how to use it to reduce machining times, helping to reduce costs and become more competitive. But by missing out on training, manufacturers aren’t moving forward and aren’t as competitive as they could be.
“Delegates always agree it’s vital in helping keep them ahead of their competitors.”